Microsoft: The Dangers of Online Presence

This week Microsoft had a minor PR scuffle when one of it’s creative directors, Adam Orth, dropped a twitter bomb about “always on” DRM this spark a minor debate with BioWare employee Manheer Heir. 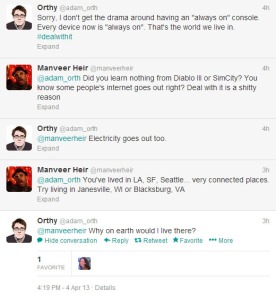 “We apologize for the inappropriate comments made by an employee on Twitter yesterday. This person is not a spokesperson for Microsoft, and his personal views do not reflect the customer centric approach we take to our products or how we would communicate directly with our loyal consumers. We are very sorry if this offended anyone, however we have not made any announcements about our product roadmap, and have no further comment on this matter.”

This a perfect of how to quickly put out a potential fire, but it does bring up a very significant PR dilemma, in a world where anybody can post their own opinion about company policies publicly and globally, how can these unintended messages affect the image if the company? Should there be guidelines and polices in place to keep employees from becoming unintended and uncontrolled spokespersons for the companies they work for? What should the consequences if someone crosses those lines?

When Electronics Arts released it’s new SimCity game on March 5th, I don’t think they realized the popularity of this long-standing title, hundreds of thousands of avid gamers purchased the game, many of whom have been with franchise over it’s twenty-five year history. EA opted for an “always-on” DRM system that required users to login into a server and stayed connected as long they were playing the game. Unlike MMO this system was for a single player game and really had more to do with keeping the intellectual property out of the hands of privates that enhancing the experience for gamers.

EA Simcity servers couldn’t handle the number users running the game, thousands of people weren’t be able to play a game they just bought, this led to a lot of angry customers, EA has always been a bit slow to react to these situations, promised to add more servers and look into an option of an offline mode. EA has had a history of poor customer service and received the Economist’s award for worst run company in America of 2012, currently the company is trying to rebuild it’s image but this incident has already put it in the running for the award for 2013.

What would you do the help restore gamer’s confidence in EA?

A Little Bit About Myself

I’m Scott Lidstone, a second year marketing student at the Camosun School of Business, I’ll be posting blogs on my site for my public relations class, after the class is over for the semester I’ll be posting content of a different matter containing tips and tricks of audio-engineering and  reviewing some audio software.  I’ll also be blogging a bit on graphic design and providing some handy resources that you can use in your own projects.

Originally from Montreal, I currently live in beautiful downtown Victoria, British Columbia, I’ve been involved in music since the age of 8, and found my passion in audio engineering at the age 16. I’ve been fortunate to work with some awesome artists in the last twenty years and hope to open my own studio and independent record label  in the near futre. I’ve also worked a graphic designer and artist for the last 10 years developing websites, advertisement, and album art.